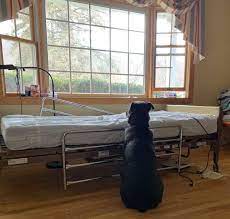 After the heartbreaking photo of Moose sitting next to his dad’s hospital bed went viral, rescuers were hoping for a happy ending…

A rescue dog mourning the loss of his adoptive human has found a new family after a photo of him grieving went viral.

The dog, Moose, was pictured sitting next to his human’s hospital bed, patiently waiting for his dad’s return, unaware that his owner had passed away.

The photo was posted by Eleventh Hour Rescue along with the dog’s story and a plea to find him a new home a week after Moose’s owner’s death. The rescue wrote of the photo:

“Moose sat patiently next to his dad’s hospital bed, waiting for him to return, not knowing that “Dad” had passed away. Poor Moose has now been returned to Eleventh Hour Rescue and he’s taking the loss of his dad pretty hard.”

The rescue later told TODAY that Moose also “was waiting by the door, waiting for his owner to come home” according to Moose’s owner’s caretaker. She couldn’t console him so returned him to Eleventh Hour Rescue so they could try and get him adopted.

Moose, a 3-year-old Labrador mix, had a sad back story that Eleventh Hour shared. Moose was found tied to a railroad sign in front of an animal shelter in Georgia in 2017.

“Moose was at that shelter for many months and during that time he had no interest from adopters. This was very unfortunate for Moose. You see, the longer a dog sits at a kill shelter, the closer they get to being euthanized due to overcrowding. Luckily for Moose, a local shelter volunteer was determined to not let that be his fate.”

The volunteer arranged for a rescue partner to take Moose and he was transported to New Jersey where he quickly won many fans among the volunteers.

“We were won over by his happy personality and his love for life. We were all rooting for Moose to find his perfect home. And then one day, his “dad” discovered him and they fell in love. Moose finally had a loving home of his own. The future seemed pretty bright for Moose. But a year later tragedy struck and his dad passed away, leaving Moose in need of a home once again.”

The rescue asked if someone could help “Moose’s heart heal” with either a foster or permanent home.

Moose’s photo and story quickly spread online and the rescue soon received several adoption applications. And within three days they announced “this sweet, loving boy” has been adopted.

“MOOSE HAS BEEN ADOPTED by a wonderful family who will care for and love him for the rest of his life! Here is Moose pictured with his new human siblings (Mom & Dad were a bit camera shy). Thank you again to everyone who shared his story!”

Eleventh Hour revealed that Moose is going to a four-person family who recently lost their own dog of 14 years and wanted a dog they could give a home to. They also are friends of one of the rescue’s volunteers.

We’re so happy that Moose now has a chance to heal and has found a forever home. To see more of the dogs Eleventh Hour has available for adoption, visit their website. Woman Rescues Dying Chained Up Dog, The Dog Grabs Her Hand To Say “Thank You”